The Shy Guy’s (and Gal’s) Guide to Online Meetings

Does the thought of leading a meeting scare the daylights out of you? Maybe just the idea of speaking your mind fills you with anxiety and dread. We’ve all felt a touch of it, so don’t get down on yourself. Others have overcome this trait, and unless your shyness has you living inside a cardboard box in the basement of a house on a deserted island, you can too 😉

In an unauthorized biography, Marissa Mayer is described as a painfully shy child. She overcame it to become a key executive and spokesperson at Google and now serves as CEO of Yahoo!

But let’s make one distinction: shyness and introversion are two different things.

Introverts are wired to spend time alone, cramming information into their heads and processing it. They’re often happy to be by themselves, content with their own thoughts. But when it’s appropriate to speak up, they do so.

Not so with shy people. They too may prefer to be alone, but their condition is worsened by a tendency to feel bad about it. Their solitude may be driven more by fear than by preference. 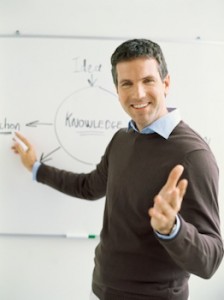 Fortunately, few people (maybe even zero) are totally shy or introverted.  Almost all of us are a blend of introvert and extrovert, shy and social.

The problem is that the business world favors extroverts. CEOs are always seen running meetings, holding press conferences, and being interviewed. Rarely does a corporation’s annual report feature a picture of the CEO in the library, half-hidden by a stack of books, poring over reports.

So to accelerate your career, you may need to work on your shyness. C’mon, you can do it.

As in all matters, there’s power in decision. It’s a mental shift that says, “OK, I know I tend to be shy in meetings, but my career demands that I be more outspoken, so I’m gonna do it.”

You may discover that most people show up at meetings unprepared, thinking they’ll be brought up-to-speed by the discussion. Make it a point to be the most prepared person in the room, maybe even more prepared than the leader. You’ll feel more confident and, when you open your mouth … hey, you’ll know what you’re talking about!

Get right to the point, state your position, and back it up. “I’m not in favor of a delay. We should go forward with the proposal, for these three reason.” That structure is called headline-1-2-3. Other possible structures include pros-and-cons, compare-and-contrast, and claim-and-proof. Another great persuasive technique is to state the objection that’s on everyone’s mind then overcome it.

Extroverts make it look so easy to hold the spotlight — chattering away, participating in discussions, and relishing conflicts. But for many of us, meetings are draining. The anxiety you feel before, during and after meetings takes a toll. So don’t feel you have to participate every moment. Instead, pick your battles and put your energy into issues that mean the most to you.

Let’s get something out of the way. At some point, you’re going to say the wrong thing. Or someone may contradict what you’ve said. Or you may get stuck trying to think of the right word and feel a bit foolish. Mistakes in meetings are rarely fatal, so resolve to speak up even if you fear making a mess. There’s value in the skill of cleaning up your own mess. 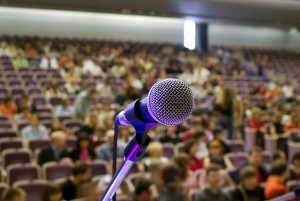 There’s a great movie called The King’s Speech. It dramatizes how King George VI of England worked to overcome his stammering condition so he could help lead his country through a time of war, economic hardship, and political change. He had a great purpose, one that made his efforts worthwhile.

The world needs introverts: those who can dig deeply into things and bring their intelligence and insight to difficult situations. And if you allow your shyness to hold you back, it’s the world’s loss — your loss too.

What techniques do you recommend for overcoming shyness? Please post a comment for the good of other readers.

Come on, you’re not that shy, are you?